The Cottingley Chronicles By Tink Harris.

Elsie was the daughter of Arthur Wright, one of the earliest qualified electrical engineers. She borrowed her father’s quarter plate camera and took photos in the beck behind the family house. When Mr. Wright, upon developing the plates, saw fairies in the pictures, he considered them fake. After the taking of the second picture, he banned Elsie from using the camera again. Her mother, Polly, however was convinced of their authenticity.

The matter first became public in the summer of 1919 when Polly Wright went to a meeting at the Theosophical Society in Bradford. She was interested in the occult, having had some experiences of astral projection and memories of past lives herself. The lecture that night was on `fairy life’ and Polly mentioned to the person sitting next to her that fairy prints had been taken by her daughter and niece. The result of this conversation was that two rough prints came to the notice of  Theosophists at the Harrogate conference in the autumn and thence to a leading Theosophist, Edward Gardner, by early 1920.

Sir Arthur Conan Doyle had been commissioned by the Strand Magazine to write an article on fairies for their Christmas issue, to be published at the end of November 1920. He was preparing this in June when he heard of the two fairy prints in circulation and eventually made contact with Gardner and borrowed copies.

He showed the prints to Sir Oliver Lodge, a pioneer psychical researcher, who thought them to be fakes, perhaps involving a troupe of dancers masquerading as fairies. One fairy authority told him that the hairstyles of the sprites were too ‘Parisienne’ for his liking. Lodge also passed them on to a clairvoyant for psychometric impressions. Conan Doyle dispatched Gardner to Cottingley in July. Gardner reported that the whole Wright family seemed honest and totally respectable. Conan Doyle and Gardner decided that if further fairy photographs were taken then the matter would be put firmly beyond question. Gardner journeyed North in August with cameras and 20 photographic plates to leave with Elsie and Frances hoping to persuade them to take more photographs. Only in this way, he felt, could it be proved that the fairies were genuine.

Meanwhile, the Strand article was completed, featuring the two sharpened prints, as Conan Doyle sailed for Australia for a lecture tour to spread the gospel of Spiritualism. He left his colleagues to face the public reactions to the fairy business. That issue of the Strand sold out within days of publication at the end of November. Reaction was vigorous, especially from critics. 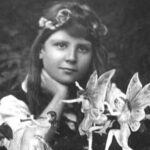 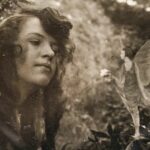 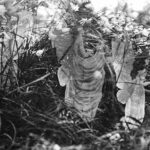 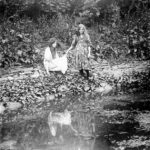 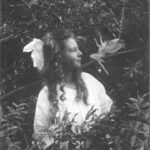 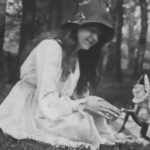 The Cottingley ‘fairy’ pictures provoked heated argument. To Sir Arthur Conan Doyle they were the long-awaited proof of the existence of spirits–but to many people they were just clever fakes. In the school holidays of August 1920, Frances Griffiths was asked to come by train to Cottingley from Scarborough, where she had gone to live with her mother and father after the First World War. Aunt Polly had written to say that Edward Gardner would be travelling up from London with new cameras so that the cousins might have further opportunities of taking fairy photographs to add to the two they took in 1917. The fifth and last fairy photograph is often believed to be the most striking. Nobody has ever been able to give a satisfactory explanation as to what seems to be happening in the picture, however Conan Doyle in his ‘The Coming of the Fairies’ advances a detailed, if  somewhat over elaborate, view of the pictured proceedings:

“Seated on the upper left hand edge with wing well displayed is an undraped fairy apparently considering whether it is time to get up. An earlier riser of more mature age is seen on the right possessing abundant hair and wonderful wings. Her slightly denser body can be glimpsed within her fairy dress.”

In August 1921, a last expedition was made to Cottingley. This time the clairvoyant, Geoffrey Hodson, was brought along to verify any fairy sightings. The feeling was that if anyone apart from the girls could see the fairies, Hodson could. Alas, the fairies were not photographed although they were seen both by Hodson and by Elsie. But by then both Elsie and Frances were tired of the whole fairy business. Many years later, Elsie looked at a photograph of herself and Frances taken with Hodson and said: “Look at that, fed up with fairies!”

In late 1981 and mid 1982 respectively, Frances Way (née Griffiths) and Elsie Hill (née Wright), who took the photographs admitted that the first four pictures were fakes. Speaking of the first photograph in particular, Frances has told the present author on more than one occasion, “My heart always sinks when I look at it. When I think of how it’s gone all round the world. I don’t see how  p-people could believe they’re real fairies. I could see the backs of them and the hatpins when the photo was being taken.” It started, as both ladies agree, with the best of intentions. Frances, she says, was able to perceive many forms of fairy life by the side of the stream at the bottom of the garden of the Wright household and was, understandably, continually drawn back to the stream again and again. Occasionally she fell in the water, soaking her clothes, and was severely told off.

Elsie was much moved by the tears of her cousin, and sympathised with her when she blurted out to the adults that the reason why she went so often to the bottom of the garden was because there were fairies to be seen there. Although Elsie lacked Frances’s keen perception of fairy life around her, she was sensitive to atmosphere and had a fine appreciation of the wonderful mysticism of nature.

Frances had a copy of Princess Mary’s Gift Book, and the girls used a series of illustrations by Arthur Shepperson as a model from which Elsie, who had received some art training from the college in nearby Bradford, constructed the fairy figures. They cut the figures out using sharp tailor’s scissors borrowed from Frances’s mother, who worked as a tailoress in Bradford and they secured them to a bank of earth using hatpins. The girls took the famous photographs, dropped the cut-out figures into the swirling brook and went home. About a month after the first photograph was taken, Elsie felt that she too would like to be photographed with a nature spirit of some kind. She made a gnome cut-out, which was duly hatpinned into the ground.

Frances was a less expert photographer than Elsie and according to her, the elongated hand in the picture is due to ‘camera slant’; believers in the authenticity of the photographs have, however, attributed it to ‘psychic elongation’. If the second picture is examined, it is easy to see the point of a pin in the gnome’s midriff. But Conan Doyle, after examining the print, concluded that the point was an umbilicus and that therefore birth in the fairy kingdom might be a similar process to human birth. The two photographs were printed and circulated among the girls’ friends in the autumn of 1918, and the matter gradually languished, with neither girl admitting to the truth of the affair, rather preferring to keep people guessing.

In the summer of 1920, Gardner at last succeeded in persuading the girls to take a further series of photographs. These three last photographs were believed by both Gardner and Conan Doyle to constitute proof that it was possible to photograph fairies. Frances, on the other hand, had always marveled at the fact that anyone could believe them to be genuine. The flying fairy in the third photograph was pinned to the branch behind it; it was drawn freehand by Elsie and seems to be out of proportion. The fairy offering flowers to Elsie in the fourth photograph was attached to a branch in a similar way, and sports a fashionable hairstyle that had attracted much comment. The two cousins are divided about the authenticity of the fifth picture.

To the casual eye, it looks very much like the result of a simple overlapping of photographs, but Frances insists that it was a genuine photograph of fairies. “It was a wet Saturday afternoon and we were just mooching about with our cameras and Elsie had nothing prepared” she says. “I saw these fairies building up in the grasses and just aimed the camera and took a photograph.” Elsie, on the other hand, insists that all five photographs are of cut-outs. It must be borne in mind that Frances has often said that it is as if some psychological blockage prevents her remembering events surrounding the photographs with any accuracy yet this discrepancy in the cousin’s accounts of taking the photographs remains curious.

The second set of photographs was hailed with joy by Gardner and trapped by their first trick, Elsie and Frances had no choice but to remain silent; the consequences that would have resulted from any disclosures must have seemed terrifying to them. With regards to Geoffrey Hodson going to Cottingley to check the girls’ observations essentially, to see if he, too, could see the fairies. His lengthy descriptions of fairy life, endorsed by the overawed Elsie and Frances who saw nothing while Hodson was present, as they disclosed in a television interview in 1975.

Hodson went on to become a distinguished writer on clairvoyance; it is impossible to rule out the possibility that his experience may actually have been genuine. At the time, the photos were viewed by some as evidence of fairies, most notably Sir Arthur Conan Doyle. Doyle wrote a book called ‘The Coming of the Fairies’ about the Cottingley Fairies and his belief in them. His beliefs in spiritualism and contact with the spirits of the dead were part of a larger worldview that encompassed the belief in fairies. His support and his book on the Cottingley Fairies carried great weight with like-minded people of the day.

In 1978, it was found that some of the fairies resembled drawings in the 1915 book ‘Princess Mary’s Gift Book’ by Claude A. Shepperson. The cousins remained evasive about the authenticity of the pictures for most of their lives, at times claiming they were forgeries, and at other times leaving it to the individual to decide. In 1981, in an interview by Joe Cooper for the magazine ‘The Unexplained’, the cousins stated that the photos were fake; they had held up cutouts with tacks.

Frances Griffiths, however, continued to maintain until her death in July, 1986 (Elsie died in April, 1988) that they did see fairies and that the fifth photograph, which showed fairies in a sunbath, was genuine…

A recent news article regarding a Cottingley Fairies hoax photo sold for £1,000