Weeks of anticipation built up for me and my wife, Huntress Kimmie, as Spring mini Detectival drew closer. What unfolded after our arrival would not soon be forgotten, by us or any that attended this fantastic metal detecting rally event. Not only did we meet people we knew, we met people in the community that we’ve chatted with online for years, putting faces to names at long last.

The vibe in the air was electric and full of excitement as campers were setting up getting ready for a nights sleep in the field, the fire pit in the communal area was lit taking the chill off anyone that went near it on that cool Friday evening in Henley on Thames.

Saturday morning everyone lined up at the starting point, the horn blew, and off they went. Kimberley and I ventured to a field not far from the starting point, as everyone spread throughout the landscape, in search of treasure. Little did we know we were about to witness one of the most spectacular medieval hoards ever found by a few lucky detectorists.

I had just found a nice decorated lead trade token and all of a sudden I heard someone yell HOARD! Not far from where I was. As I turned and looked I could see a couple people congregated jumping up and down. Of course I immediately ran over to see what it was all about, my trusted camera at the ready. One of the guys at the spot had just dug 5 silver hammered coins up in one hole, another had found a gold noble, another had found more hammered’s, all next to each other. A van raced down the road towards us and a man immediately taped off a small area around them. 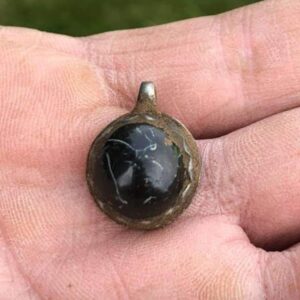 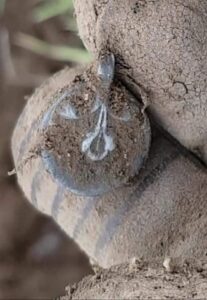 I then started to detect right outside the tape and my metal detector sounded off with a sharp, solid signal with a high VDI number. I dug it up and behold to my amazement was a beautiful shiny silver necklace pendant. I looked up and to my left and realised I was literally right next to what was going to become a massive hoard of epic proportions. I stood at the hoard site, recording everything on my camera. Another detectorist detecting around the tape line yelled Hammered! The staff moved the tape around him in that direction. Then another detectorist yelled Hammered! in the opposite direction. At this point more of the event staff had arrived and decided to closed off a massive perimeter surrounding this amazing and spreading hoard. Continuing to record, I saw no one else really recording too much, so I just stood there, recording it, because I knew this is important and should be saved on video as well as photos and documentation later on.

Well, my phone had a good storage capacity, and I had a full battery, so I recorded until one was full and the other was dead. I had just saved this bit of history that unfolded in a field at Detectival, on my phone, how cool! Hoping this would be a great contribution to someone down the line, I put my phone away for the rest of the day and continued to detect. 6 p.m. came and we all stopped, returned to base camp and everyone celebrated by the fire and all across the event.

This was my and Kimberley’s first Detectival, and perhaps our fifth rally ever, and we were just truly blown away at the hindsight of the days occurrence. One thing I can say is it was one of the best times of our lives. We will be back in the fall for the main Detectival without a doubt. It was a well organised event, with all the amenities you’d require. The food and drink was fantastic, the band, the DJ, the staff of The Metal Detectives Group and of course Peter Turrell and Ashley Kordowski of Leisure Promotions were all awesome.

Thanks to all and congratulations.

By Clodhopper Scott and Huntress Kimmie