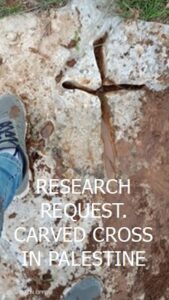 We recently recievved a message from Abo Deeb in the Palestine requesting information about a carved cross he discovered whilst walking in the state. We are not experts in any area of the subjects covered by Archmdmag, so put out a request for The Encyreaders with more knowledge to assist and give a better identification.

However, we would suggest it  looks like a Christian cross. But are unsure of the context in that location, although being suggested Biblically to be an important area in the birth of Christianity, this could relate to that time.

The Encyclopedia Brittanica states – the Cross is the principal symbol of the Christian religion, recalling the Crucifixion of Jesus Christ and the redeeming benefits of his Passion and death. The cross is thus a sign both of Christ himself and of the faith of Christians. In ceremonial usage, making a sign of the cross may be, according to the context, an act of profession of faith, a prayer, a dedication, or a benediction.

There are four basic types of iconographic representations of the cross: the crux quadrata, or Greek cross, with four equal arms; the crux immissa, or Latin cross, whose base stem is longer than the other three arms; the crux commissa, in the form of the Greek letter tau, sometimes called St. Anthony’s cross; and crux decussata, named from the Roman decussis, or symbol of the numeral 10, also known as St. Andrew’s cross. Tradition favours the crux immissa as that on which Christ died, but some believe that it was a crux commissa. The many variations and ornamentations of processional, altar, and heraldic crosses, of carved and painted crosses in churches, graveyards, and elsewhere, are developments of these four types.

Any observations about Abo’s discovery can be added to the comments a the rear of this article and we will communicate them to him.