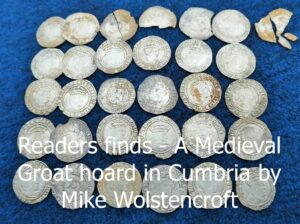 My detecting buddy Steve and I have been wandering the fields of Cumbria for around 20 years now. In summer, when the land is green and the birds are singing, it is God’s own country. In winter however, the hills and valleys can present a challenging day out. We have many permissions and there was always one farm where we never managed to catch the farmer. He was never there when we called. This all changed last summer when we finally saw him fixing a fence and stopped for a chat.

He’s a really nice chap and gave us free reign to wander about on his land. He had never been approached before (probably because he was so hard to get hold of) so we had virgin fields to go at. The first 2 visits produced many big junk targets as to be expected from undetected land. There were also finds of interest, one or two silver milled, the usual host of buttons buckles and Georgian coppers…..and a single hammered, a Henry VI Calais mint groat.

So this was our third visit and we decided to hit 2 large flat fields where the grass had been too long in the summer but now thanks to a large flock of sheep was very detectable. I was using Steves new Nokta Simplex as my CTX is currently bust. Sadly, walking round for a couple of hours produced very little of interest. That may be down to me not knowing the machine too well, I had literally switched it on and started searching. I decided go into a 3rd field which was on a steep slope. I do like a nice slope, and have had some good results in the past although I tend to suffer with my knees and back afterwards. It’s an age thing.

I went through the gate leaving Steve on the flat and took a random diagonal path up the slope. Maybe 10 meters in I got my first signal, it rang up as a 65 on the Simplex. Having no idea what a 65 was going to be I dug it and was very happy when a silver disc popped out on the second spadeful so maybe 6 inches deep. I gave it a gentle wipe and saw the very recognisable side profile of Henry VIII. I called Steve and we met over the dry stone wall to take a closer look. After pleasantries around my use of his machine to find a hammered I went back to the hole, filled it and put the plug back. I stood up, put the machine back on my arm and moved…..immediately there was another signal, maybe 6 inches to the left of the first. I dug it and an almost identical coin popped out.

By this time Steve is moving as fast as his hairy little legs would take him in my direction. I stopped for a minute to take stock and carried on swinging above the 2 holes. There were more signals. By this time Steve was 5 feet behind me and getting signals on his ETrac as well.

Honestly, the next hour is a blur. Just the two of us in the middle of nowhere shouting “Another one” several times and stopping a couple of times to try and tot up how many we had found. Eventually we both ground to a halt as the slope took its toll on our old bones. We ended the day with 31 coins in total. Most of the coins were Henry VIII 2nd coinage groats, mainly Lis and Arrow mintmarks with a couple of Sun marks thrown in, but there were also several 3rd coinage groats. We are guessing then that the coins will date from 1540 to 1547 and were lost or deposited sometime in the early 1550s as most don’t show excessive wear with several showing really nice portraits. My main question is why only groats, is it common to find 30+ coins of the same denomination. I guess that may be answered in the FLOs write up.

Thank you very much Mike for the use of the images and information. If you would like to include your find in our readers finds section. Please get in touch.