Skip to content
Home→Archaeology, History→Lost Relics of the Knights Templar: A review

Lost Relics of the Knights Templar: A review

Sometimes I feel the need to write a review of something new on TV, be it pap, or something that grabs my attention and shakes me by the collar.

History channels Lost Relics of the Knights Templar is most certainly the latter.

I am a Freemason. One of the main reasons I entered the fraternity is, as far as I am concerned, to learn about the actual reality of Freemasonry and its history, you must become one and experience the journey from an apprentice to master Mason. One thing I learnt early on was the continuation and intricacy of what can best be described as subsections or tree branches. Where lies my own personal goal of becoming a Knight Templar.

Added to this interest is the large book collection regarding the histories and symbology of the Knights Templar. I do not claim to be an expert, in fact, many books remain unread. But the romance, the history and the knowledge that the Knights Templar did exist, fills me with an unerring love of the subject.

I have visited many Templar and alleged Templar sites in the UK. I spent several days staying in the holiday let building next to Rosslyn Chapel in Scotland, before Dan Browns influence brought the masses. As somebody not overly religious, sitting in an empty Rosslyn Chapel gave me one of the only near religious experiences I have ever had.

So when the Lost Relics of the Knights Templar was initially advertised, my interest was piqued. Although, given similar titles and the History channels other programmes, namely the Curse of Oak Island, I expected another long running exercise of taking team of ‘experts’ and excavating various sites, searching for alleged treasures that never get found.

Oh how wrong I was!

In the History channels words – ‘Lost Relics of the Knights Templar follows one of the world’s most prolific yet unknown treasure hunters, Hamilton White and his long-time friend, Carl Cookson, as they trace the origin of an amazing hoard of relics – believed to have belonged to the legendary Knights Templar. Until today, no major items belonging to the Knights Templar – the medieval Special Forces of Christendom, made famous by The Crusades – have ever been recovered. However, Hamilton and Carl believe they have at last discovered what everyone else has been looking for – a treasure trove of artefacts which reveal who the Templar’s were, how they worshipped, and why they were targeted, imprisoned and wiped out by Papal decree in 1307. Alongside Hamilton and Carl’s journey, the story of the Templar’s will be told by historians, including presenter and best-selling author of ‘The Templar’s: The Rise and Spectacular Fall of God’s Holy.’ 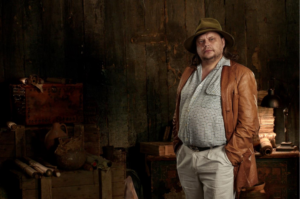 Hamilton White from what I understand began buying and selling antiques, artifacts and collectables in his teenage years. Through this Hamilton has amassed his own wealth. In the programme we are shown multiple historic artifacts of jaw dropping proportions. His home outstrips most museums. With a collection ranging from prehistoric, to medieval, to historic weapons. To actually visit, would probably see me never want to leave and be in a state of childlike wonder. To understand, you will certainly have to watch. I’ve heard him described as eccentric. I’d suggest someone very passionate about history, with the ability to acquire it! 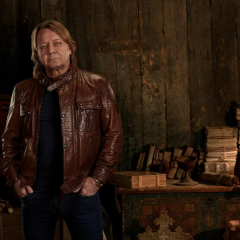 Carl Cookson, who I liked immediately as he’s a scouser and I’m from Ellesmere Port!! Carl again is self made, dealing in property, he has amassed his own wealth and is very passionate about cars and motorbikes, which we see many of throughout the series. According to the programme, their friendship began upon meeting while both lived in Monaco. Carl owned a former templar property and upon learning this Hamilton, whose interest in Templar history had existed for many years, visited. This relationship led to a joint search for items from what is known as the Tomar Hoard. 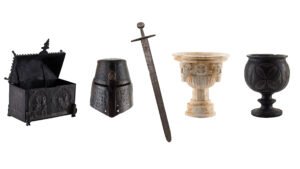 The Tomar Hoard is a hoard of weapons, helmets and chalices believed to have been owned by the Knights Templar. Known as the Tomar Hoard, the collection is thought to have been amassed by the Catholic military order, famed for their exploits in The Crusades, between the 12th and 14th centuries. Its current owner, Hamilton White, spent years assembling the scattered pieces from the initial 1960 discovery in Tomar, Portugal, the site of a major Knights Templar stronghold.

Five items from the collection feature in the series, also hosted by Dan Jones. Dan is a bestselling historian, TV presenter and award-winning journalist. His books, which have sold more than a million copies worldwide, include the Plantagenet’s, The Templar’s and The Hollow Crown. He has also written books about the Peasants’ Revolt and Magna Carta, and co-authored the Colour of Time with Marina Amaral. His latest book, published in autumn 2019, is called Crusaders.

Each of the episodes focuses on a different relic 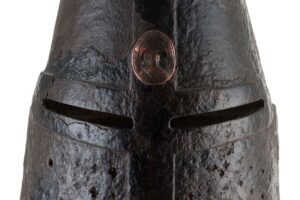 A helmet once owned by Heinrich Himmler, the helmet is suspected to have been made in the 13th Century and is in the style of ‘Great Helms’ favoured by medieval knights. Heinrich Himmler may have once owned this helmet, and it is almost identical to one on display at the Altes Zeughaus museum in Berlin, named ‘The Dargen Helmet’. 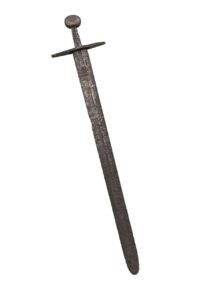 A sword once potentially carried by a Templar Grand Master who died at the Siege of Acre in 1291. 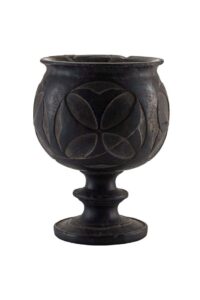 A Stunning Obsidian Chalice – A spectacular chalice made from one of the world’s rarest materials – obsidian, known as volcanic glass. It stands at 21cm high, has a diameter of 14.5cm at the lip and measures 16.5cm across the most bulbous part of the bowl. 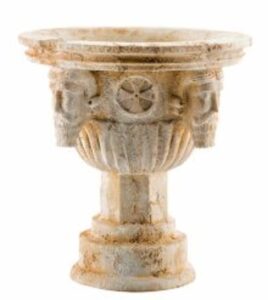 A Libation Cup – A stunning piece of medieval marble art, with carved heads acting as handles. 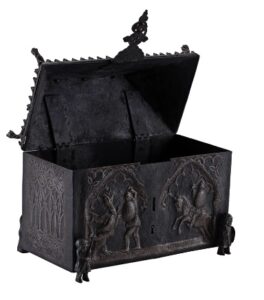 And finally a Reliquary box – An ornate item possibly made in the early 13th Century and is 29cm tall. Several characters are depicted on the box, possibly St George and Jesus Christ, but in Monk Robes.

Again, each episode is not what I expected. We are introduced to each individual item, which is then researched and in some cases subjected to test procedures to ascertain provenance to its age and to learn more about each Item. 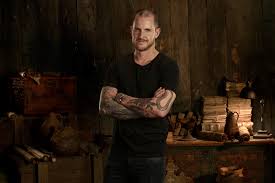 Dan Jones appears regularly, spending time in museums and libraries, accessing documents and other records, exploring more of the Templar history and adding context to each episode.

Carl and Hamilton travel the UK and Europe, visiting locations known throughout Templar history. But also exploring lesser known sites with other renowned researchers and authors, exploring theories and learning more about the history.

Overall the series is an exceptionally well put together historical show. The artifacts discussed are phenomenal to behold. There will be many naysayers both in the Templar research and historic communities. But for me, with a passion for the subject, I learnt a hell of a lot historically and was captivated by the passion shown by Carl and Hamilton. The other ‘experts’ involved in the series offered more theories and knowledge that I previously had no idea about.

If the Tomar hoard is as stated, parts of an actual hoard discovered by treasure hunters looking for Roman items in the 1960’s in Portugal, surely this is one of the most important historic finds in many years.

I thoroughly enjoyed the Lost Relics of the Knights Templar. Carl and Hamilton’s trips around the world and the relics they possess are the things of my dreams. I look forward to another series, learning more about their finds, seeing more of their Templar treasures and hopefully being able to see for myself, all of the treasures in the series and additional items in a public museum setting one day in the future. I certainly hope to invite Carl and Hamilton on to a future episode of the BIG Metal Detecting radio and TV show.

Now, about 15 years ago, I began a study of masonic pigpen and Rosicrucian cypher’s on gravestones in the UK. During my research I came upon suggestion of (if in remember correctly) the 7 lost treasures of England. My memory isn’t what it was, and i will be revisiting this. But there is suggestion that there are 7 lost treasures of the British isles. And that’s something I believe that Carl and Hamilton are in the perfect position to learn more from.

Another discovery I made with friends, which I fully believe we have correct, is a rural church near to where I live, is also a Templar site of some significance. These theories and information I am now passionately keen to revisit, thanks to Carl and Hamilton.

To Carl and Hamilton, Kudos gentleman. And thank you to the history channel for bringing this to our screens.