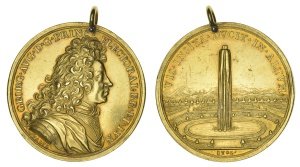 A gold medal showing the earliest known portrait of Georg August, Electoral Prince of Brunswick-Calenburg-Hanover, who would later become King George II, is to be offered in a sale of Coins and Historical Medals on Tuesday & Wednesday, April 6 & 7, 2021 at International coins, medals, banknotes and jewellery specialists Dix Noonan Webb.

Dating from 1701, the year of his 18th birthday, the medal shows the Prince, who was the last British monarch born outside England, on one side and Schloss Herrenhausen, Hanover on the other. It is estimated at £6,000-8,000.
Peter Preston-Morley, Head of the Coin Department and Associate Director, Dix Noonan Webb, explained: “This is a very rare depiction, thought to be the earliest portrait of George II – at this time he had no idea that he would be king! It is from an old Irish collection, the formation of which is shrouded in mystery, but it is likely to date from the early 19th century, if not earlier.”

The sale will also include the fourth and final part of the Walter Wilkinson Collection of Coins of Elizabeth I (1558-1603). Comprising 358 lots, of note is a very fine and very rare seventh issue Crown, which was previously in the Eleanor Ahbe Collection and is estimated at £7,000-9,000, while very clear example of a seventh issue Crown, that was once in the Lord Rodney Smith Collection carries an estimate of £5,000-7,000. Also in the sale is the Ross King Collection of British Coins. As Mr King, who has been collecting for 67 years and lives in Canada, explains: “While putting this collection together I was drawn to George III in particular, with all the major historic events during the period of his long reign. Just think of all that happened during these years – the American Revolution, the French Revolution, the Napoleonic wars, the War of 1812 but most importantly, as far as coinage was concerned, the Industrial Revolution which completely changed the way coins were minted (the Cartwheel twopence showed the power of the new steam presses). The unusual types of coins struck under George III (Bank of England ninepence and one shilling and sixpence, countermarked Spanish 8 réales, etc), the proofs, patterns, medals and plethora
of 18th and 19th century merchant tokens all drew me in and held me for many years.”

TUESDAY, MAY 4 & WEDNESDAY, MAY 5 – COINS, TOKENS AND HISTORICAL MEDALS