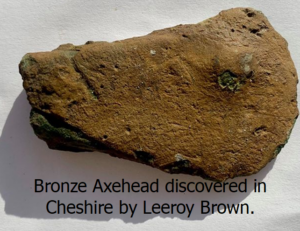 One of our readers – Leeroy Brown, contacted us to share his discovery of a Bronze axehead.

Leeroy told us that “ I discovered the Axehead last September near Northwich. I was using a golden mask and I’ve only been detecting 15 months” he continued “ I am back on my site there’s activity off a battle I’ve found nearly 150 musket balls and lead bullets! ”

I live in the county and have knowledge of the areas history. I was able to tell Leeroy that Northwich was a parliamentarian garrison site in the civil war. So it’s very likely musket balls from that era could be found. 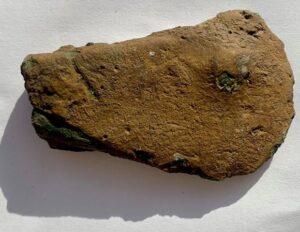 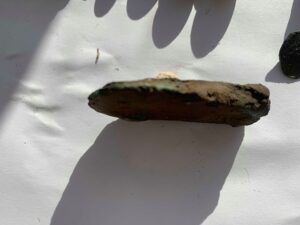 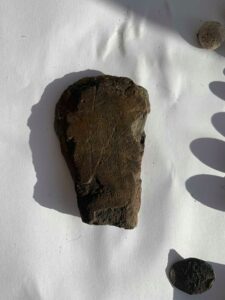 The axehead is sub-triangular in plan and profile. If complete, the plan may have narrowed towards the butt creating a more typical lentoid shaped plan. The parrallel sides are relatively straight, expanding towards a curved shaped blade that has a width of 39mm. One face of the object has a dark brown patina and has a smooth surface that is covered in striations. The other face has lost its original surface and has a light brown patina. The edges are rough and have a green patina.

The axe probably fits into the earliest phases of metal working in Britain, metalworking stage I-II, which corresponds to Needham’s (1996) Period 1-3 c.2500-2050 cal.BC, or slightly later.

This object is relatively small and narrow compared to other Bronze Age flat axeheads and similar examples on the PAS database have been recorded under various types, including miniature object

Thanks to Leeroy for contacting us with his find.