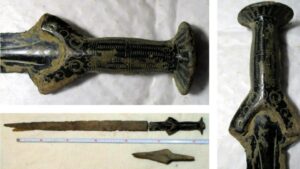 A man searching for mushrooms close to his home came across a 3,300-year-old sword from the Bronze Age. The rare item has excited archaeologists who say they plan to dig in the surrounding area.

Roman Novák was indulging in a typical Czech pastime in the Jesenicko district of Northern Moravia when he came across a rare item.

“It had just rained and I went mushroom-picking. As I went, I saw a piece of metal sticking out of some stones. I kicked it and found that it was a blade, part of a sword. I then dug some more to find a bronze axe.” 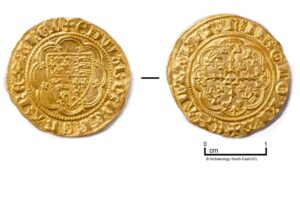 Weston Homes’ Abbey Quays construction site in Barking is next to the ruins of Barking Abbey and brought in archaeologists during the early stages of enabling works excavation. Weston is working with RPS Consulting Services as archaeological consultant and Archaeology South-East which is undertaking the field work to excavate to artefacts.

The site is located at the northern end of Abbey Road, and situated between the former Barking Abbey (of which only ruins now remain) and original course of the River Roding. The findings may lead to some academic rethinking on what occurred in Barking during the Roman, Saxon and Medieval periods, according to Weston’s team.

Military dog tag with the name Stupples found in cabbage field in Shepherdswell by metal detectorist from Hawley, Dartford

A military dog tag, potentially dating from the early 1950s, has been discovered by a metal detectorist who wants to reunite it with its rightful owner.

Emma Pierce, 29, was scouting through a cabbage field with other enthusiasts on an organised dig in Shepherdswell near Dover when her XP Deus started beeping. 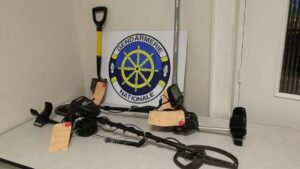 In a statement from the French police they are cracking down on illegal metal detecting by non french nationals.

On patrol on the banks of the Moselle, in Hauconcourt, the gendarmes of the Metz River Brigade caught a Belgian couple carrying out searches for WW1 items using metal detectors.

The police investigation showed that the couple were using detectors without any authorization or a licence from the Regional Directorate of Cultural Affairs (DRAC).

The various offences were noted and all the detecting equipment was seized and confiscated.

The rule is simple: in France, without authorization, the use of a metal detector is prohibited without a licence.

Roman gold coin commemorating the assassination of Julius Caesar 2,000 years ago sells for a record £3.24 MILLION at auction 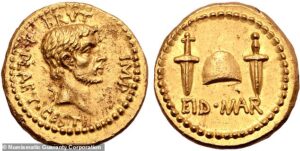 Continue reading – Roman gold coin commemorating the assassination of Julius Caesar 2,000 years ago sells for a record £3.24 MILLION at auction

All of these great stories were discussed live on the BIG Detecting show with Co Host – Adrian Gayler and guest Scott Holden of Detector Network on the 05/11/20 episode below.