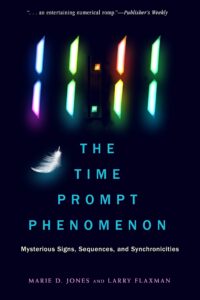 All over the world, people report waking up at night, looking at the alarm clock, and noticing that it is 11:11pm. This happens again the next night, and the next. Soon they begin to see 11:11 everywhere; from computer screens to digital watches to addresses, labels, menus, billboards and advertisements. Is this repetition simply coincidental? At first, it may merely be forgotten as a lone anomaly – an annoyance. But perhaps, these mysterious time prompts are really wake-up calls urging the observer to sit up and pay attention.

But pay attention to what? And why? The reports of people noticing strange and repeated associations with the number 11 are on the rise, prompting numerous speculative theories. Principle among them is the theoretical connection of this phenomenon with the coming Mayan Calendar end date of 12-21-2012. According to some scholars, that end time will occur precisely at 11:11am GMT, when humanity will allegedly transcend one level of consciousness and rise to another much higher vibratory way of being. This theory further suggest that our “junk DNA,” the approximately 97% of our non-coding DNA, will somehow be responsible for triggering this spiritually awakened state of consciousness.

But it’s not just the number 11 that is showing up in people’s lives – often accompanied by unusual events or profound insights…. or even the appearances of angels and aliens, spirit guides and even dead relatives. Mysterious numbers and strange sequences appear throughout the history of human experience. What do they mean? What secrets do they hold? Throughout nature we find numbers, often grouped into sequences and patterns that seem to form an underlying structure to all of reality, both the seen and unseen. Perhaps not surprisingly, the natural world offers a plethora of examples of divine and intelligent patterns ripe for analysis and conjecture. Many of these patterns are even present in the structure of living organisms! Two of the most stunning examples are the Golden Ratio and the Fibonacci Spiral, both of which imply a higher order of measurement behind what many of us take for granted, like our own bodies…or a seashell.

The Golden Ratio, also known as the Divine Ratio, the Golden Ration and Golden Mean, is an irrational number of approximately 1.618033988749. One might ask why that specific ratio would be any more “divine” than any other. Perhaps only the Great Designer knows for sure, but this ratio is found throughout the natural, scientific and man-made worlds as the highest expression of balance, symmetry and aesthetics. This fundamental formula can be described as “the ratio whereby the ratio of the whole to the larger section equals the ratio of the larger section to the smaller section.”

Referred to as “phi,” this ratio is present in many sacred icons such as the measurements of the Great Pyramid of Giza, the structure of a five-pointed star, a Pentagram (a sacred object to followers of Plato and Pythagoras) and even in the outline of the Acropolis near Athens, Greece (which takes the shape of a Golden Rectangle.) Most notably, as represented by Leonardo Da Vinci’s famous Vitruvian Man, the golden ratio is present in the structure of the human body, with outstretched arms and legs showing the Golden Ratio at work.

The entire Universe, it seems, has a mathematical structure, just as the human body does. In his book “Just Six Numbers,” Sir Martin Rees, the Royal Society Research Professor at Cambridge University and Astronomer Royal, makes a bold case for explaining how just six fundamental numbers can explain the entirety of the physical cosmos. These numbers, “constant values that describe and define everything from the way atoms are held together to the amount of matter in our universe,” were imprinted during the Big Bang itself and began a process of cosmic evolution that allowed for the creation of stars and galaxies, as well as all of the necessary energy states that govern matter and force as we know it.

“Mathematical laws underpin the fabric of our universe – not just atoms, but galaxies, stars and people,” Rees writes. “Science advances by discerning patterns and regularities in nature, so that more and more phenomena can be subsumed into general categories and laws.” The goal of theorists, Rees continues, is to one day “encapsulate the essence of the physical laws in a unified set of equations.”

Each of these six fundamental numbers would seem to be utterly critical to the absolute “rightness” of the universe that we live in, a rightness that allowed for all the perfect combinations, events and interactions to lead to life, at least on our little planet. English astronomer James Jeans is quoted as having said, “The universe appears to have been designed by a pure mathematician.” The laws that govern motion, gravitation, force and matter are all, at their foundation, mathematical laws that give order to nature and form the bedrock of all physical reality. The word “astronomy” itself means “law of the stars,” and those laws have their basis in mathematics. Even the esteemed 13th century scholar Roger Bacon recognized that natural laws were fundamentally mathematical laws.

This poses an even deeper question. Is God a number? Can the creative force itself be expressed in a mathematical equation? Many of the top scientists of past and present believe it can and again point to the finely-tuned nature of our Universe as proof. But on a personal level, human life indeed mirrors this same fundamental truth. We live according to numbers. Whether we ascribe to the beliefs of numerology and astrology, which tell us about our character traits and destinies through the positioning of stars and the number of letters in our names, or we are the result of DNA and its own numeric structural forms, numbers own us and we seek to find meaning and understanding in them when they appear over and over again in our lives. The human brain is hard-wired to seek and find patterns wherever it can, in order to understand a complex situation or arrangement. Likely, this is a primitive survival mechanism remaining from our prehistoric ancestors, when it was important to discern a stampeding boar from a pet goat in the dense underbrush. This phenomenon, known as “matrixing,” or more commonly “pareidolia,” is a universal human response. The term pareidolia, according to Wikipedia, describes a “psychological phenomenon involving a vague and random stimulus (often an image or sound) being perceived as significant. Common examples include images of animals or faces in clouds, the man in the moon, and hidden messages on records played in reverse.”

Many studies support the brain’s ability to not only construct patterns based upon evident information, but additionally, to place a time upon them. To wake up once at “11:11” would mean little… but if the brain makes a neural connection after waking up twice at that specific time, that connection would then become an embedded time code that will continue to manifest. Think of the times you have forgotten to set the alarm only to wake up exactly at the same time you normally would in order to prepare for work.

If indeed the brain can tell time, and if the brain engages in the matrixing of meaning in an attempt to discern a pattern, how can we then know whether a time prompt is just a time prompt, a sheer coincidental event dictated by the Law of Truly Large Numbers, which states that when you have a large enough sample of people or subjects, pretty much anything can happen and will then appear to be somewhat miraculous? Are these time prompts, and numbers in general, as mysterious as we are told they are by scientists, philosophers and thinkers, or just simple digits we ascribe great significance to by a brain habitually trained to do so? Perhaps it is a bit of both.

For the millions of people who are experiencing 11:11, or 1:11, or 2:22, or 3:33 or any of the amazing and intriguing time prompts and sequences over and over again, there is powerful and profound meaning. That meaning exists both on an individual and collective level, and suggests that there is a connective link to everything we perceive as reality, including the underlying laws that make it all manifest in our three dimensional existence. We live according to times, dates and numbers. Numbers compose the very foundation of our reality. Numbers shape our destiny, both personal and for the entirety of humanity.

As Pythagoras once said, “All is number.”